Pretty Damn Punk: How the Ramones Inspired the Punk Movement and Me!

Despite their fame in the late twentieth  century, the four members of the Ra mones weren’t great musicians— when  they formed the band, they were still  learning how to play their instruments.  As a result, their music wasn’t complex,  but their striking outfits and carefree DIY  spirit set the tone for the punk movement  and its DIY subculture. The band hated  the hippie movement, and the musi cality and training of those performers,  and they wanted to let people know…  loudly. According to lead singer Tommy  Ramone, “[Our] music is an answer to  the early seventies when artsy people  with big egos would do vocal harmonies  and play long guitar solos and get called  geniuses. That was bullshit. We play rock  and roll. We don’t do solos.”

In 2014, exactly 40 years after their  founding, I discovered the Ramones, and  punk, for the first time.

I retied the loose laces of my Doc Mar tens, plugged in my electric guitar, and  got ready to play the easiest song in our  setlist: Blitzkrieg Bop by the Ramones.  It was my favorite song that I got to per form at middle school rock camp be cause the lyrics were simple, there were  only three chords to learn, and I thought  the song was incredibly catchy and fun.  As I began to play, I realized the song re ally was a “bop.” Although I had learned  one of the most iconic songs by one of the most iconic punk bands, I had no  idea what punk meant at the time. Punk  to me was all about looking cool, and  looking cool meant leather and Doc Mar tens. That’s it. 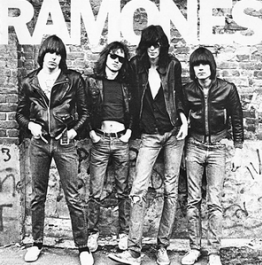 It’s been almost 50 years since the Ramones were founded, and it’s worth re visiting their hit song, Blitzkrieg Bop, and discuss how it was the foundation for  the punk movement beyond just looking  cool.

The quintessential Ramones song was  written and first performed in 1976—  much like the other songs they would  go on to write, it was held together by a  handful of chords and an insanely fast  tempo.

The name of the song refers to Nazi war fare with blitzkrieg translating to “lightning war,” and the song mimics the lightning fast and incredibly loud nature of  this war tactic. There’s also a reference to  sex in the song— “bop” was sometimes used to refer to sex during the time the  song was written. The chant at the be ginning of the song, “Hey ho! Let’s go!”  existed simply because the band wanted  a chant in their song just like the Bay City  Rollers. Following the chant, the instrumentals and lyrics launch a full-scale  attack on the audience (just like a blitzkrieg). “Hey ho, let’s go/ Shoot ‘em in the  back now/ What they want, I don’t know/  They’re all revved up and ready to go,” a  verse goes. This refers to the uncertainty  in war and the quick nature of a blitzkrieg  (and also sex/a “bop”).

The bop is over before you know it at  only two minutes and 13 seconds long,  but it perfectly encapsulates the band  and their foundation for the punk movement. It was a loud answer to the sweet  melodies and guitar solos of rock during  the 60s and 70s. The simplicity of their  music made a social and political statement by not making one at all. An interviewer in 1977 asked the band why  they play so loudly, and they answered,  “We like that. I don’t know.” They played  it loudly because they wanted to. They  chanted at the beginning of the song be cause they wanted to. They played their  music simply because they wanted to.  Their do-it-yourself philosophy and their  DIY because you want to attitude influenced the punk movement and its DIY  subculture. Everything from their outfits  to their self-taught instrumentals to their  low-budget performances influenced  DIY subculture. You just can’t have punk  without the Ramones.

The group continued to record and per form music until the 1990s when Tommy,  Dee Dee, Joey, and Johnny disbanded in  1996. However, their legacy and impact  on the punk movement has long outlasted their touring days.

Seven years removed from my time in  middle school and rock camp, the Ramones mean something different to me  now. They’re a symbol of more than just  not caring and looking cool; the band  is iconic to me for their ability to be authentically themselves and not give a shit  about what anyone else thinks. Simply  put, this authenticity and indifference to  what other people and society want is the  very foundation of punk.

Looking cool is about wearing what you  want to wear, not what other people  want to wear. I wish I had realized that in  middle school—I wish I had learned to  not care. The Ramones and their music  inspire me to be authentically myself in  everything I wear, say, and do. And that’s pretty damn punk!